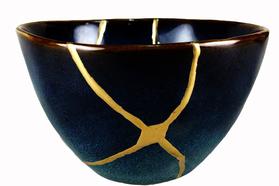 Kintsugi is the ancient Japanese art of repairing broken pottery with precious metal in such a way that the pottery is not only useful again, but in the process, has become more beautiful and precious.  It treats the break and repair of the object as part of the history of the object. It is similar to Wabi-Sabi, in which the flawed or imperfect objects are not shunned, but are embraced.

The above image is used with permission.

This information is created by Lakeside Pottery Studio. www.lakesidepottery.com

Some of you know that I have been part of a weekly writer's group in St. Louis for over 15 years. That group helped me write a novel and land a literary agent.

After reading Hermann Hess' book, Journey to the East, and after settling on the metaphor of Kintsugi for Servant-Leadership, I recently began writing a novella in which the protagonist, a Kintsugi craftsman mentors a younger man, helping him overcome deep debilitating wounds and once again find his purpose in life.

I plan to release individual chapters as we go along for FREE for those who subscribe to my blog site.

I have started using the term "Kintsugi Leadership" as a metaphor and symbol for Servant-Leadership because I think it reflects many of the qualities of the Servant-Leader.

Kintsugi: The Art of Broken Pieces from Greatcoat Films on Vimeo.

Moving toward a culture of justice, reconciliation, redemption, forgiveness, and beauty 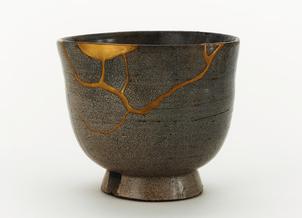 “The best test, and difficult to administer, is this: Do those served grow as persons? Do they, while being served, become healthier, wiser, freer, more autonomous, more likely themselves to become servants? And, what is the effect on the least privileged of society? Will they benefit or at least not be further deprived?”

“The servant-leader is servant first…it begins with the natural feeling that one wants to serve, to serve first.  Then conscious choice brings one to aspire to lead. That person is sharply different from one who is leader first.”

Both quotes taken from Greenleaf's book, Servant Leadership,
a Journey into the Nature of Legitimate Power & Greatness.

Servant-Leadership is about understanding that the needs of the follower are as important as those of the leader.

Servant-Leadership, as a philosophy, sees the possibility of building and promoting a more caring society in which serving first is focused toward creating greater meaning and fulfillment; greater relational engagement; greater personal, group, organization, and community transformation—in short, greater personal and general human flourishing.
Adapted from Horsman, in Foundations of Servant Leadership